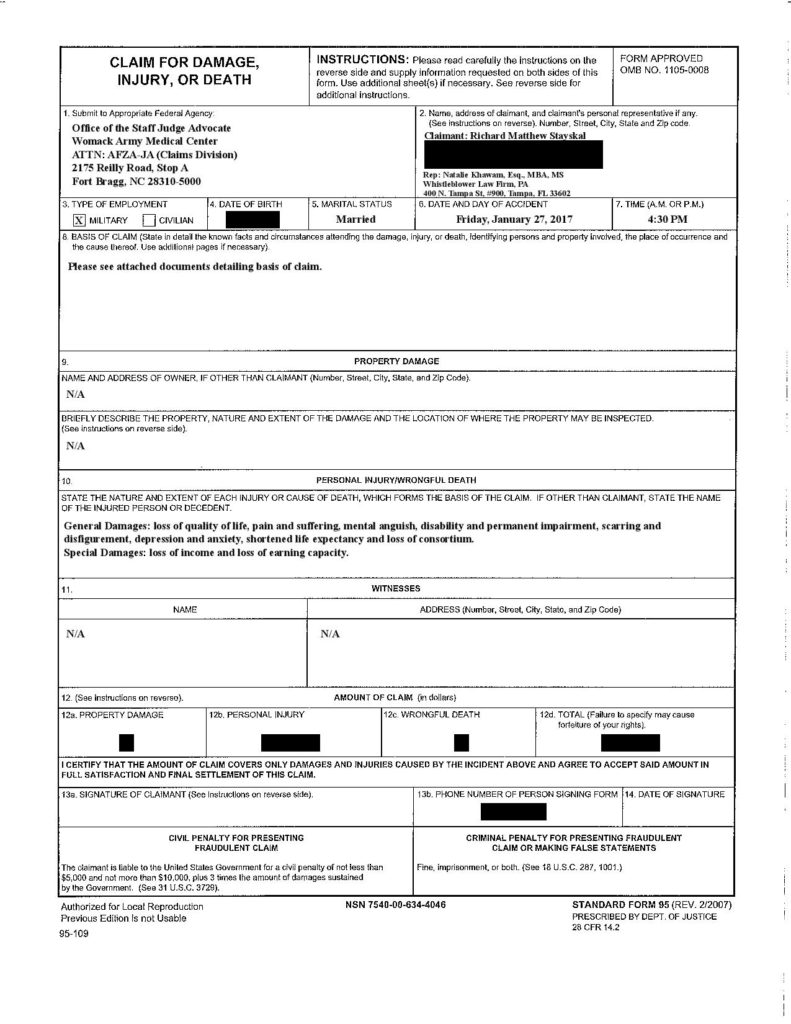 CHARLOTTE, N.C. – A North Carolina Green Beret with stage 4 lung cancer was finally able to file a military medical malpractice claim against the government on New Year’s Day. The claim, for more than $5 million, was filed one minute after the new law, named in his honor, went into effect.

Khawam did not disclose the exact amount the Stayskal family is seeking in damages.

For more than a year, the Purple Heart recipient from Pinehurst, N.C., and Khawam, have been fighting for the right to sue the government for malpractice, which active-duty military are prevented from doing under a 1950 Supreme Court ruling known as the Feres Doctrine. In 2017, doctors at Womack Army Medical Center misdiagnosed Stayskal’s lung cancer as “pneumonia.” The botched care caused Stayskal to miss six months of cancer treatment, which could have prolonged his life.

For more than a year, Stayskal and FOX 46 have pressed lawmakers to take action to allow service members, who are victims of botched medical care, to seek justice. Five months after FOX 46 first aired an investigation into Stayskal’s case, lawmakers introduced a bill named in his honor. Under a bipartisan compromise, which President Donald Trump signed into law on Dec. 19 as part of the National Defense Authorization Act, Congress set aside $400 million to the Department of Defense to investigate and payout malpractice claims for the first time.

The law opens the door for other service members, who have been victimized by negligent care, to be compensated – a measure of justice, families say, that has been denied to them for nearly 70 years.

Often, military families who sacrifice so much for the country, are left with no answers, no justice, and no accountability when military medical care goes wrong.

Stayskal’s claim was filed at 12:01 a.m. on Jan. 1, Khawam said. He is now the first soldier to file a claim under a law sparked his story and inspired by what lawmakers called his “heroic activism.”

“We’re just beginning,” said Khawam. “We welcome and are excited for more great things to come in 2020!!!”

MALPRACTICE CLAIM THAT STAYSKAL FILED: In a redacted copy of the claim, provided to FOX 46, Stayskal is claiming damages for: “Loss of quality of life, pain and suffering, mental anguish, disability, and permanent impairment, scarring and disfigurement, depression and anxiety, shortened life expectancy and loss of consortium” along with special damages for “Loss of income and loss of earning capacity.”

This article was originally posted by Fox 46 and can be read here: https://www.fox46charlotte.com/news/n-c-soldier-first-to-file-malpractice-claim-against-govt-under-new-law-he-fought-for?fbclid=IwAR2PSIRGF6xOUhno4k0baKIpYi5YXevPO31MOPb9EgZ7QgOszmdOo4IP5KY