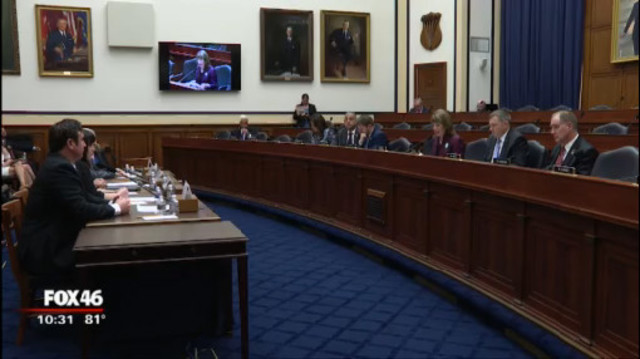 A bill named after a Fort Bragg Purple Heart Green Beret with cancer is one step closer to becoming law.

The bill, which was added to the National Defense Authorization Act, passed the House on Friday. It would give soldiers the right to sue for medical malpractice when their care at home goes wrong. It would not apply to injuries or medical care in a war zone.

The ability to sue for medical malfeasance is a right even federal prisoners have but something our troops can’t do because of a 1950 Supreme Court decision called the Feres Doctrine.

Speier is pushing to change that.

“This is probably one of the most important pieces of legislation that I’ve had the chance to participate in since I’ve been in Congress,” said Rep. Jackie Speier (D-CA).

FOX 46 was there when Stayskal met with Speier last November and again when he testified before Congress in April.

“His powerful testimony made it very crystal clear to me that this is the kind of injustice that had to be fixed,” said Speier. “So, he gets 100 percent of the credit.”

Stayskal survived an enemy’s bullet in Iraq. He likely won’t survive the medical care he received at Fort Bragg.

FOX 46 was first to uncover the botched care Stayskal received at Womack Army Medical Center. Records show doctors misdiagnosed his lung care as pneumonia. Doctors later noted a possible mass and recommended a biopsy but Stayskal, and his wife Megan, say they were never told any of that.

His cancer was eventually diagnosed by a civilian doctor six months later. The cancer has spread and is now stage four terminal.

At a time when nothing in Congress seems to be bipartisan, Speier’s bill has gained support from Republicans and Democrats alike.

“On both sides of the aisle we want to make sure our service members have the best health care,” said Speier. “And when they don​​​​​​’t receive the best health care and there’s something as grievous as loss of life, or terminal illness, there should be a way of compensating them. It’s only right.”

The Department of Defense opposes making any changes to the Feres Doctrine, arguing it would disrupt military order and erode discipline if troops were allowed to sue the U.S. government.

“Certainly, your coverage on Richard had an effect on many of the members of Congress in his region that became interested in the legislation,” said Speier. “And I’m delighted that it’s bipartisan in nature.”

Hudson voted against the Defense Authorization Act, which included his Feres Doctrine bill, citing opposition to other amendments.

He says he will keep fighting to fix the Feres Doctrine and make it “right” for service members.

“As Fort Bragg’s Congressman, my top priority is taking care of our military community,” Hudson said in a statement. “I will continue to work in a bipartisan way to finally making this right for our service members and their families.”

Hudson recently introduced Stayskal to Vice President Mike Pence, who expressed his support for the bill, according to Stayskal.

“Your amazing journalism is the reason we have a Bill passed by the House!!!,” Stayskal’s attorney, Natalie Khawam, said in a text message, crediting FOX 46. “Thank you from the bottom of my heart!!!”

Khawam released the following statement, on behalf of her Whistleblower Law Firm and Stayskal:

Previous post After the VA missed a spine-eating infection, a loophole kept him from suing. A new bill would change that for other vets Next post Cancer-stricken Fort Bragg soldier gets encouragement from Trump