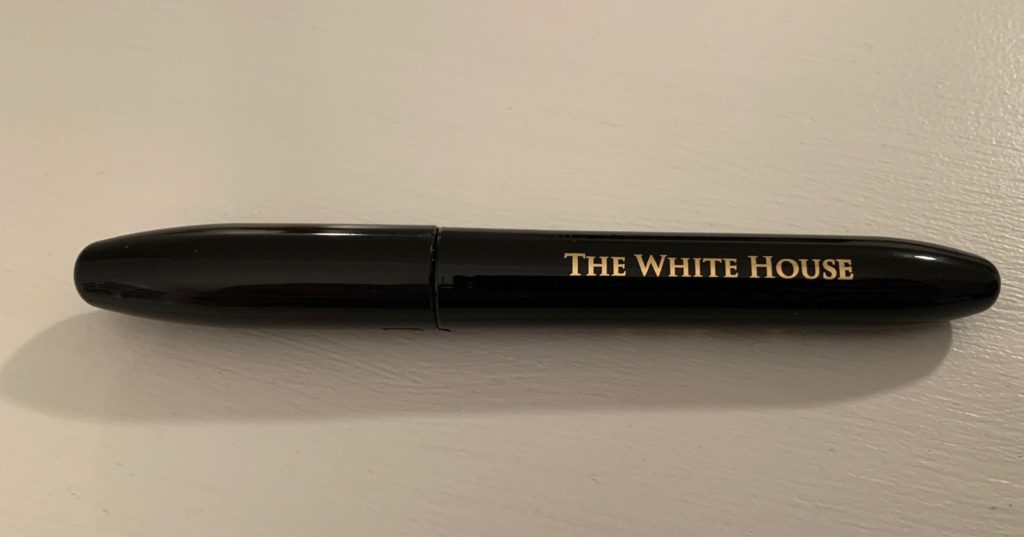 PINEHURST, N.C. – A terminally ill Green Beret, whose story of military medical malpractice, which was first reported by FOX 46 in 2018, garnered national attention and helped change federal law, received a personal thank you gift from the White House on Sunday.

“As I told SFC Richard Stayskal and his wife Megan, ‘You touched my heart when I first met you and I knew this was a fight worth fighting for,'” Rep. Richard Hudson (R-Concord) tweeted, referencing FOX 46’s coverage of his meeting with Stayskal on Capitol Hill last month.

Hudson, who co-sponsored the military medical malpractice bill, hand-delivered the black pen to Stayskal at his home on Sunday. On one side, it says “White House.” On the other, it has the president’s signature.

It is the same pen President Trump used to sign the National Defense Authorization Act last month, which included legislation, named after Stayskal, that will allow service members, for the first time ever, to be compensated for negligent medical care.

Congress allocated $400 million to the Department of Defense to pay out and investigate military medical malpractice claims.

“Today I had the honor of delivering the pen President [Donald Trump] used to sign the NDAA to SFC Stayskal himself,” tweeted Rep. Richard Hudson (R-Concord). “The law contained Stayskal’s landmark legislation that will compensate service members harmed by medical malpractice in military facilities.”

Stayskal’s attorney, Natalie Khawam, tweeted a photo of Hudson and Stayskal together along with the pen, which was an official “present from President Trump.”

“He gave Richard the pen POTUS used to sign the NDAA, making our monumental Bill into Law!!!” tweeted the Whistleblower Law Firm.

Stayskal was the first service member to file a medical malpractice claim under the new federal law.

This article was originally posted on FOX 46 and can be read here: https://www.fox46charlotte.com/news/nc-green-beret-who-fought-for-medical-malpractice-reform-gets-white-house-thanks?fbclid=IwAR0a3H1yV8cFN0_BwusB4DCaMwsAajw-YaVyhQyXquUM8ZtOrhCKwrUUVTs

Previous post Mold keeping MacDill AFB family locked out of their home Next post Army lieutenant says she was raped, but Supreme Court ruling blocks her from justice