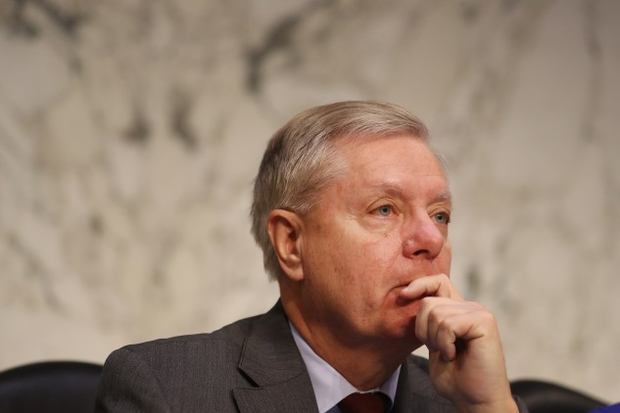 Sen. Lindsey Graham, one of President Donald Trump’s closest congressional allies, is digging in against efforts to overturn a seven-decade ban on U.S. troops suing over military medical malpractice.

Graham (R-S.C.) said nothing could sway him to give advocates a chance to make their case for a provision in the House Democratic majority’s version of the annual defense policy bill (H.R. 2500) that would create an exemption to the Federal Tort Claims Act, allowing troops to file malpractice suits in federal court. The House legislation would upend the Feres doctrine, which evolved from a 1950 Supreme Court decision barring lawsuits when active-duty troops are injured or killed because of medical mistakes in military hospitals.

A thumbs-down from Graham would stop congressional action in its tracks. As chairman of the Senate Judiciary Committee with courts oversight, Graham’s refusal to issue a waiver to the armed services panel to handle the provision means it can’t be negotiated as part of the final defense authorization measure.

“I am not for doing away with the Feres doctrine,” Graham said in an interview. “If you are hurt in a medical facility as a member you have medical retirement.”

The effort has backing from Democrats and Republicans in both chambers, and advocates became optimistic about Trump getting engaged after a direct appeal earlier by Richard Stayskal, an Army Green Beret battling advanced lung cancer that he says military doctors missed.

To Graham, allowing active-duty military to sue would have ramifications that would expose the Pentagon to constant court battles.

“The trade-off is we compensate military members when they are injured, but if you are going to open up lawsuits to all the contractors who provide new equipment, test pilots who test planes, then you are going to have a chilling effect on weapons development,” Graham said. “So the trade-off is we’ll take care if you are injured but we are not going to expose the military and the supply chain to civil liability because a lot of this technology is leading edge and pretty risky stuff.” He added that the “same thing” is valid for medical malpractice cases.

The opposition from Graham is frustrating after the legislation passed in the House, said Rebecca Lipe, an Air Force veteran and attorney who testified to lawmakers this year that the military repeatedly misdiagnosed her for reproductive injuries and lost the body of her baby after a miscarriage.

“I’m not sure how allowing people to have a basis for a claim of medical malpractice is going to have a chilling effect on test pilots. They are completely unrelated,” Lipe said. “What it would hopefully have a chilling effect on is doctors practicing without any rhyme or reason and actually giving some thought to the standard of care they provide.”

The Pentagon, in a rare public rebuke of pending legislation, opposed the Feres legislation. It says the system of medical accountability and its existing compensation to troops who are injured or killed in such incidents is adequate.

The Defense Department said it hasn’t estimated the costs of allowing claims by active-duty troops, but lawmakers say it will be about $440 million over a decade. Military spouses, family members, and retirees are already permitted to sue and the Pentagon said it paid out 67 malpractice claims for a total of $59 million in fiscal 2018.

“It’s not going to cost that much money. If we get competent medical providers, I guess it wouldn’t be a problem,” said Rep. Jackie Speier (D-Calif), an Armed Services subcommittee chairwoman and lead sponsor of the bill.

Troops are covered by a $400,000 life insurance policy, unless they opt for a lower coverage amount, and have access to disability pay and benefits. Families of troops are entitled to annuity payments and a variety of death benefits when service members are killed.

The military has seen no evidence that allowing the lawsuits will improve care, Lisa Lawrence, a spokeswoman, said in a July statement.

Because troops can’t sue over their treatment at military facilities, doctors there often don’t have malpractice insurance as most civilian hospitals, clinics, and medical facilities require, said Natalie Khawam, with the Whistleblower Law Firm, who’s taken on Stayskal’s case.

“When a physician commits malpractice, he or she is dropped by their insurance carrier.” Khawam said in an email. “Only DoD medical facilities and VA hospitals do not require their civilian physicians to carry malpractice coverage. Given the fact that they are uninsured, the soldiers are not only receiving substandard care, they are unable to have legal recourse.”

“It’s unfortunate that a sitting U.S. senator would deny our active-duty military men and women the same rights that are afforded to prison inmates and illegal immigrants,” Khawam said in a statement. “We only ask Senator Graham to meet with SFC Stayskal, a Bronze Star and Purple Heart recipient, so he could understand why this bill is so necessary to protect our military.”

Sen. John Kennedy (R-La.), a supporter of the change and a member of the Judiciary Committee, said he’s taking it upon himself to persuade Graham to consider the legislation. Kennedy introduced a separate bill in the Senate as well, after an amendment he wanted to make to the chamber’s version of the defense authorization bill (S.1790), wasn’t considered.

“I am going to sit down with Lindsey and talk about it,” Kennedy said in an interview. “My point is simply that we should not discriminate against members of the military.”

“I might have to buy him a car or something but I’ll get him to come around,” he added “That was a joke, I don’t want to get called in front of ethics. A fruit basket might do it, maybe I’ll send him a fruit basket.”