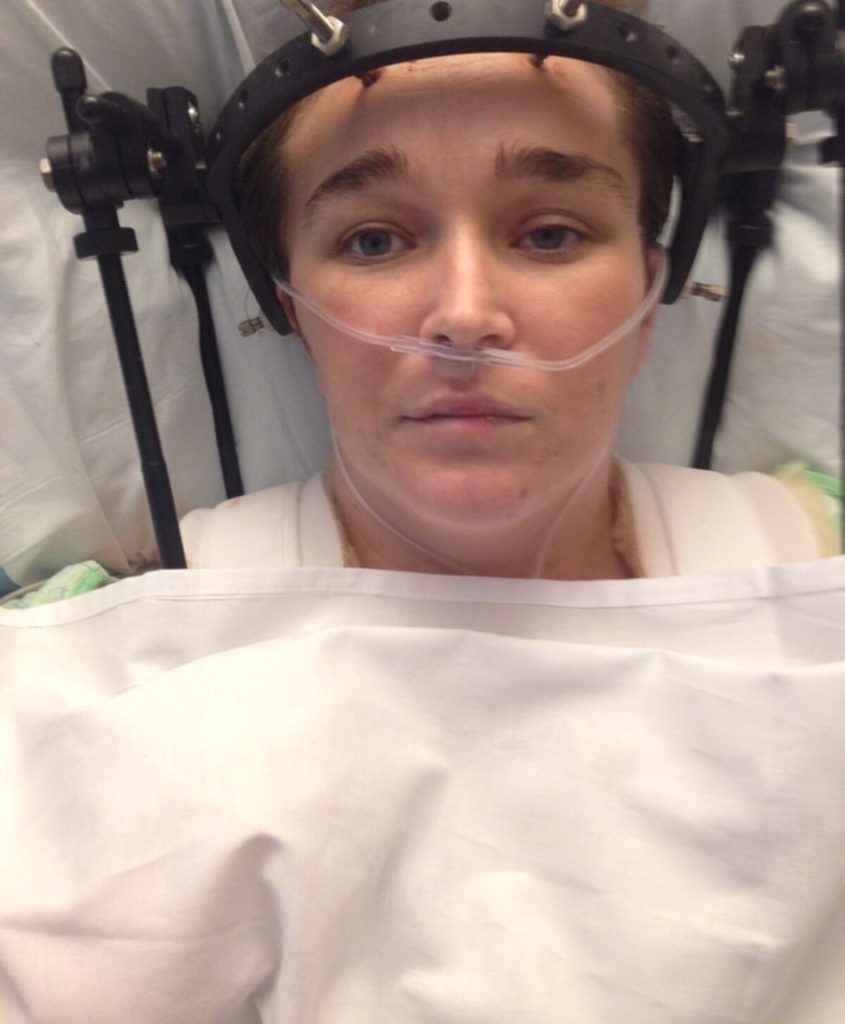 Unable to sue the Army for medical malpractice, this retired soldier is now fighting the VA for benefits

Retired Sgt. 1st Class Barbara Ospina is partially paralyzed, in debilitating pain and confined to a wheelchair for almost all of her day. Her condition is the result of malpractice at the hands of hands of military medicine, according to claims she made to the Department of Veterans Affairs, but she is paying out of pocket for a caregiver to help her bathe, dress and prepare meals, because the VA has denied her request for caregiver assistance.

What began as a treatable birth defect turned into a dislocated neck and a stroke that went undetected for days, according to records provided to Military Times. Had that initial surgery taken place at a civilian hospital, Ospina, 29, would be able to seek damages. But the Feres Doctrine, a 1950 Supreme Court decision, prevents her from suing the Defense Department for service-connected illness or injury.

“Her story represents the egregious conduct, consistent lack of care and malpractice at the hands of Wright-Patterson Air Force Base,” her attorney, Natalie Khawam of the Tampa, Florida- and D.C.-based Whistleblower Law Firm, told Military Times on Tuesday.

For now, the hope is that a bill in Congress will allow Ospina, a mother of a young son, and veterans like her to seek compensation for alleged medical mistakes that they claim have altered their lives forever.

“This case is an example of how flawed the system is, and why it’s time for change,” Khawam said.

Ospina was a public affairs noncommissioned officer for 5th Special Forces Group at Fort Campbell, Kentucky, when she started experiencing headaches, tingling and numbness in her limbs and occasional blurred vision, according to an appeal letter her husband wrote to the VA in 2017, after she was denied access to their caregiver program.

She thought perhaps she’d been injured during combatives training with her unit in early 2013, Khawam said. After making repeated requests for an MRI, the scan showed a deformity known as a “type I Chiari malformation” ― essentially, her skull was putting pressure on her cerebellum, forcing it down into her spinal column.

On April 16, 2013, Ospina and her family traveled to Wright Patterson Air Force Base, Ohio, for a surgery to repair the malformation. The risks included hemorrhage, stroke or infection.

According to her husband’s statement in her VA claim appeal, her treatment there nearly killed her.

“The VA is claiming Barb’s condition is the result of ‘an Illness or Medical Condition,’ specifically Arnold Chiari 1 Malformation, and not from an ‘injury,’ “her husband wrote in her VA appeal, which was also denied. “Her current condition is due to INJURIES sustained from medical malpractice that occurred by a military Neurosurgeon, military nurses, and the overall horrible care she received at Wright-Patterson Air Force Base.”

Johnny Van Winkle, a spokesman for the base, declined to comment on the allegations, citing the Health Insurance Portability and Accountability Act of 1996, which prevents medical providers from disclosing a patient’s medical records.

As she began recovery, Fitzsimmon’s left eye was swollen shut and her head was leaning toward her left shoulder, Khawam said.

Her VA disability rating documents confirms that she suffers from a paralyzed cranial nerve and blindness on her left side.

“The lack of care continues when Barb is admitted for an MRI of her head and is ordered to lay flat without oxygen for an hour,” she said. “This is despite Barb crying and stating she cannot breathe without her oxygen.”

Following the MRI, she was intubated ― put on a ventilator to help her breathe, preventing her from eating on her own or speaking ― for a month.

In the VA claims appeal, her husband wrote that on April 21, medical staff informed the family Ospina had suffered a stroke.

Further, he wrote wrote to the VA, the stroke went undetected for more than a day, “even though Barbara was supposed to be receiving hourly neuro checks.”

“This led to extensive brain damage and almost to her death,” he added.

She was transferred to Miami Valley Hospital in nearby Dayton, Ohio, where she had surgery to remove part of her skull, to relieve the pressure on her brain the following day.

“It is not until June 2014 that the family learned her neck had been dislocated during the Chiari surgery,” Khawam said, when they visited Northwestern Memorial Hospital in Chicago for a consult on her continuing pain and paralysis.

There, a neurosurgeon told Ospina that her dislocated neck would be “extremely rare” if it wasn’t done negligently.

Further, Ospina’s husband wrote, the Northwestern surgeon told them he believed the stroke was the result of the dislocation, which had created a tear in the inner lining of her vertebral artery, where a clot formed and blocked blood flow to her brain.

Jenny Nowatzke, a spokeswoman for the hospital, confirmed that Ospina had been a patient of Dr. Nader Dahdelah.

“This is not from Arnold Chiari: this is from the neurosurgeon dislocating Barbara’s neck at C1-C2 during surgery,” her husband wrote. “Not only did he injure Barbara’s neck, but he did not tell anyone.”

In August of 2014, she had the removed skull portions replaced by a ceramic device, and in November, another surgery to fuse her neck.

A line-of-duty investigation found that Ospina had been permanently disabled by her medical condition, allowing her to retire in July 2016.

A month later, the VA denied her access to its caregiver program, which would provide a up to $30,000 a year so that a family member could take care of her full-time. Ospina continues to suffer from paralysis and chronic pain, her husband wrote, and spends most of her time of her time in a wheelchair.

Serious injury, according to the VA, includes “traumatic brain injury, psychological trauma, or other mental disorder, incurred or aggravated in the line of duty in the active military, naval, or air service on or after September 11, 2001, that renders the veteran or servicemember in need of personal care services,” spokeswoman Susan Carter told Military Times.

“Barb is left to pay for her own caregiver out of her VA disability paycheck,” Khawam said.

If Ospina had been originally operated on in a civilian hospital, she would have been able to sue her medical providers for the alleged negligence that led to her dislocated neck, and the pain, paralysis and loss of quality of life that followed.

“This is another example of why the Feres Doctrine needs to be changed,” Khawam said. “Our troops and veterans deserve much better, especially after they proudly served our country.”

Feres, originally designed to protect DoD from lawsuits due to battlefield injuries, also applies to what goes on at home. Since its inception, numerous service members have suffered illness, injury and death without being able to hold care providers accountable.

The issue has circulated throughout the military community for years, but on April 30, Rep. Jackie Speier, D-California, introduced a law into the most recent National Defense Authorization bill, exempting medical malpractice from Feres.

Dubbed the SFC Richard Stayskal Military Medical Accountability Act of 2019, it would allow service members of their families to sue the United States damages following the personal injury or death of a service member because of “negligent or wrongful act or omission” stemming from health care, as well as investigations or clinical trials.

It’s named for a Green Beret facing terminal lung cancer that went unreported by Army doctors. He and others testified before the House Armed Services Committee in April about the breadth and depth of malpractice service members have faced.

Previous post We were honored to sit down with CBS This Morning to discuss the Feres Doctrine. Next post Senators introduce bill that would allow service members to sue for medical malpractice
© 2016 Khawam Law Firm. All Rights Reserved.